Most of Arlington’s current Protected Bike Lanes have a weak point: bus stops.

While riders have a largely low-stress, comfortable ride separated from moving cars by parked cars, that protection falls away at the bus stop where they need to mix with large vehicles that have somewhat limited rear and side visibility.

Floating bus islands to the rescue! 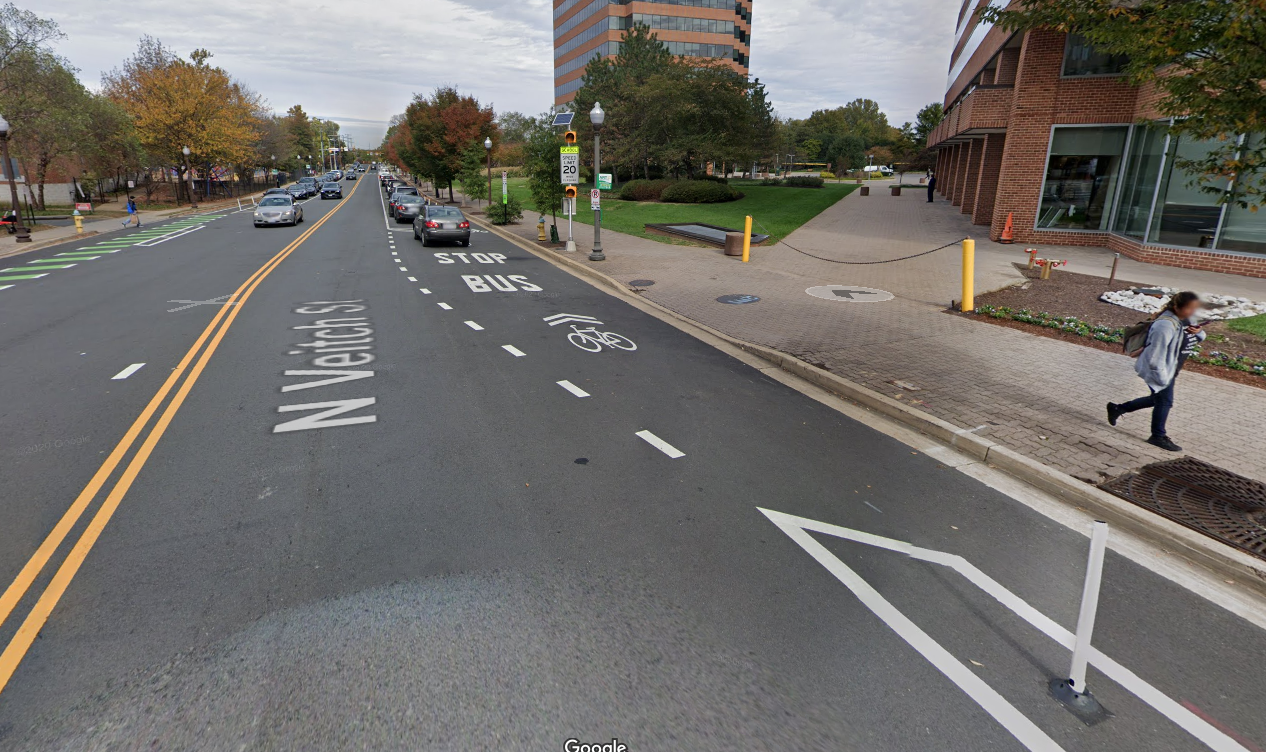 What is a Floating Bus Island?

With a floating bus island, the bus stop moves out to a sidewalk-level island that lines up with the protection for the bike lane. So with a parking-protected bike lane, the bus island aligns with where the cars park. From the sidewalk, bus users cross the bike lane and then wait on the island for the bus to arrive. The bus pulls up, stops in the travel lane, picks up and drops off passengers, and then continues on its way.

Having trouble picturing what this looks like? No worries, Arlington has one on Wilson Blvd near the new HB Woodlawn building so you can check it out for yourself (or just check out these photos). 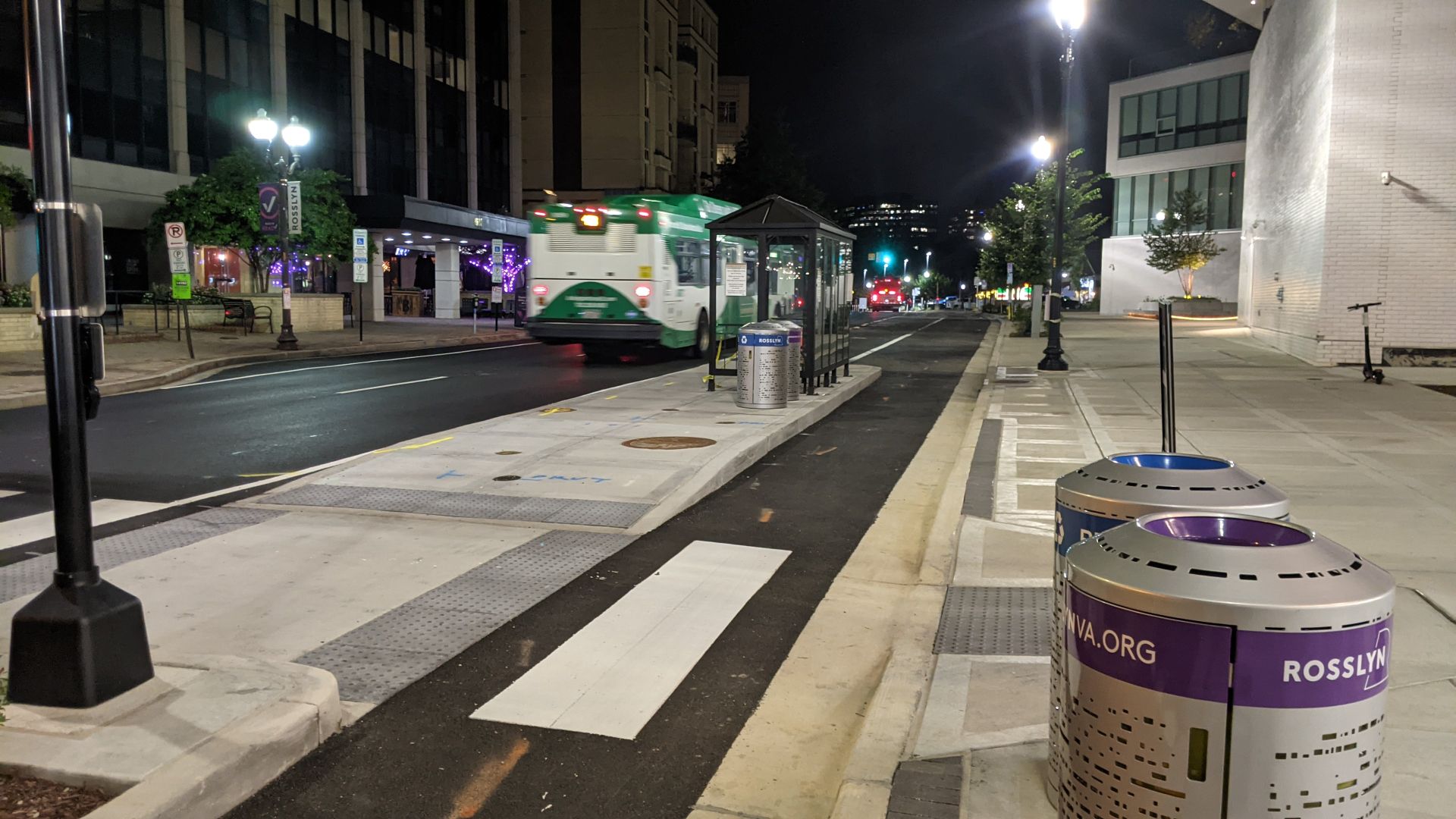 This setup is both great for people on bikes — no more mixing with big scary vehicles — but also great for transit. Since the bus doesn’t have to pull to the curb, it also doesn’t have to pull back into the travel lane. This saves the bus (and the many folks on the bus) all of the time it would normally spend waiting for a break in traffic to pull back into the travel lane. Added together over the course of many stops, this can have a noticeable impact on how long the bus takes to get you to your destination.

Why don’t we have more of them?

Arlington now has several protected bike lanes, why do we only have one floating bus island? Generally, because Arlington has achieved most of their protected bike lanes as opportunistically as part of repaving, rather than as part of a capital project. During a repaving project, options are much more limited which is why they are generally made with paint and plastic bollards. 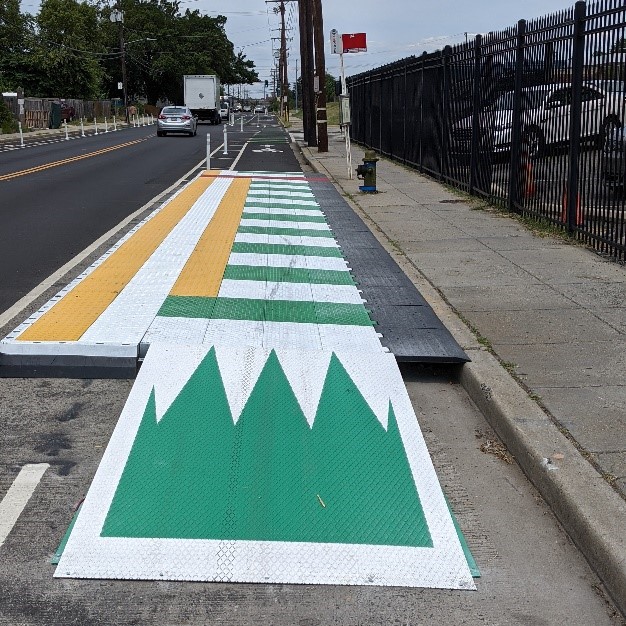 It doesn’t have to be this way, however — we don’t have to wait for a capital project. Cities like D.C. and Portland have started creating floating bus islands with a modular product that can be dropped into place, enabling them to be installed as part of simple repaving and restriping projects, rather than requiring a costly capital project that pours new curbs.

Arlington should add this or a similar product to its repaving project toolbox. It would drastically improve the quality of protected bike lane infrastructure that can be installed as part of repaving or other quick-build projects as well as speeding up transit operations, reinforcing our investment in bus service in Arlington.